Dynamics of Iboga’s African Origins and Modern Medical Use 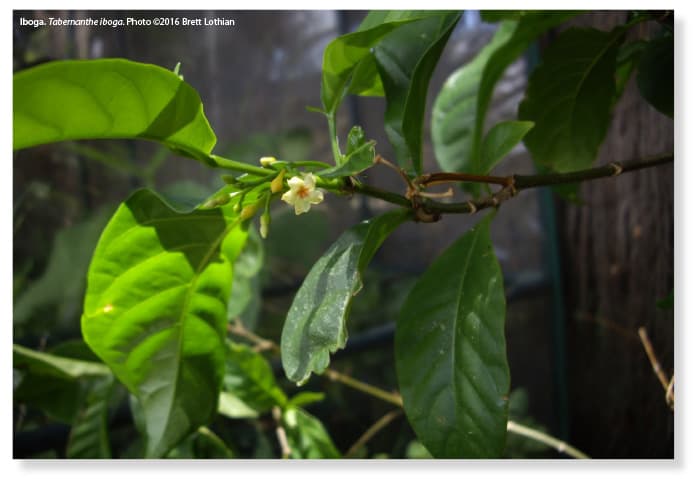 This article was published in the Spring 2016 issue of Herbalgram issued by the American Botanical Council. Read the full text online.

The term iboga (sometimes spelled eboga or eboka) refers to a small variety of African plant species in the Apocynaceae family, principally Tabernanthe iboga and T. manii.1 There are at least seven identified species in Gabon alone, although variations are not always botanically distinguished.2,3 These unassuming perennial shrubs are endemic to equatorial West Africa, where they grow in the jungle understory in a region encompassing the borders of Gabon, Cameroon, Angola, and the Republic of the Congo (Congo-Brazzaville).1 Mature plants are typically one to two meters (3.3 to 6.6 feet) in height but can grow up to ten meters (32.8 feet) under certain circumstances, and they produce inedible, oblong orange fruits after their first year.

Iboga has been translated as “to care for” or “to heal” in various tribal dialects* of the Congo Basin where it plays an important cultural role, especially in Gabon. There, it has been used for centuries as a medicine and sacrament, particularly in the traditional spiritual discipline of Bwiti.4 The plant’s medicinal alkaloids are concentrated in the inner layer of its extremely bitter bark, which is peeled from the roots of mature plants — at least three to five years of age, although older plants are preferred when available. The harvesting process often involves uprooting the entire shrub, but there are more time-consuming methods of harvesting root bark from living plants that allow the plant to regenerate but stunt further growth.