Nutrition, exercise, and meditation form the major trifecta of beneficial strategies that are easily accessible and low cost ways of increasing neuroplasticity post-ibogaine.

Neuronal plasticity, or neuroplasticity, is a term that refers to the brains ability to continue to change and develop new neurological pathways over the course of our lifetime. Experiencing the depth of withdrawal is basically the opposite of a neuroplastic state. It reveals the brain’s rigidity around deeply entrenched patterns, its inability to shift from one state to another ease-fully, producing a lot of discomfort.

A lot of times rehabs work by just building up resilience and willpower to power through that shift, but it doesn’t change the fact that people can feel uncomfortable for a long time afterwards. This is one of the obvious reasons why people seek out ibogaine treatment, and for anyone who has been through ibogaine treatment its clear that, while it’s not a magic bullet, nothing is really comparable in terms of making the transition easier.

One of the things that stimulates neuroplasticity and its host of benefits are trophic factors, hormones that lead to neurogenesis, the production of new neurons. Nutrition, exercise, and meditation are all things that can lead to the increase of these factors and have shown benefits in terms of neurotrophic signaling, neurogenesis, inflammation, stress response, and antioxidant defense mechanisms. 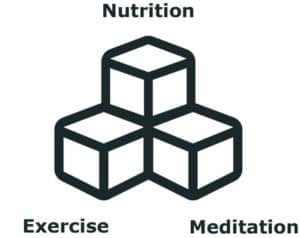 Ibogaine is one of the only known ways to orally stimulate the production of, specifically, glial cell-derived neurotrophic factor (GDNF). Not only does ibogaine stimulate GDNF, but ibogaine’s primary metabolite noribogaine does as well. Noribogaine stays in body much longer than ibogaine, and has continued therapeutic benefits following treatment. In addition to the major acute transition that ibogaine facilitates by moving more easily through difficult withdrawal symptoms, ibogaine’s ability to stimulate neuroplasticity is demonstrated by the fact that it has helped some patients to reverse symptoms of Parkinson’s disease, something unknown in any other orally-active medication.

There are a number of other therapies and strategies that can also support neuroplasticity after ibogaine, but the trifecta of nutrition, exercise and meditation creates a strong foundation to support and sustain these benefits that are easily accessible to anyone.

A healthy diet can affect many areas of our lives simultaneously. There are a few major changes that you can implement into your diet post ibogaine that will lead to increased mood, energy levels, and help to support ibogaine-stimulated neuroplasticity. While ibogaine is unique in its ability to stimulate GDNF, specifically, there are ways that you can change your diet to support the production of brain-derived neurotrophic factor (BDNF), which has similar benefits.

Diets that are high in sugar and processed foods actively reduce the production of BDNF. Taking the time to read food labels and make choices that actively avoid sugar, cutting out sweets, and focusing on real foods and natural ingredients will make a huge difference. Making this change can sometimes be very difficult and many of us don’t realize how dependent we are on sugar in our diets and it can actually produce some difficult withdrawal symptoms, but making this shift can be easier after ibogaine for the same reason that its easier to stop other dependencies.

Certain foods actively increase the production of BDNF. These include green tea, curcumin (found in turmeric, which is also anti-inflammatory and supportive for people with pain issues), and polyphenols (found in plant-derived foods such as herbs, fruits, vegetables, dark chocolate, and extra virgin olive oil).

While using opioids and after quitting it’s common for people to experience some fluctuation in weight. There are a number of reasons for this, but dopamine does play a role. Taking dopamine precursors can help in a number of ways to ease withdrawal, PAWS, and some of the side effects such as weight gain. Also, when planning meals, especially if you are starting to exercise, have any weight goals, or are learning how to balance a diet, tracking your macronutrients (protein, carbs, fats) with an app like MyFitnessPal can go a long way.

Physical activity, specifically aerobic activities and cardiorespiratory health, also increase the levels of trophic factors, particularly BDNF. Exercise is also neuroprotective and support of all kinds of cognitive functions. Developing a practice of physical exercise  after ibogaine can be a huge accomplishment, and one that leads to short-term, mid-term and long-term rewards. While a lot of the research that you’ll find on neuroplasticity focuses on elderly, aging populations, the research suggests that the major benefits in long-term neural health come from active life-styles during mid-life.

While various forms of yoga and other activities can be hugely beneficial and also meditative, looking for classes and practices that increase heart rate are ideal. Jogging, cycling, and all kinds of cardio classes are all hugely supportive. If you’re not able to afford a gym membership or individual classes you can find a library of different workouts that focus on both cardio and strength training for all different levels online on Fitness Blender or on any one of dozens of workout apps. After trying a bunchof them I settled on Gym Plan for weight routines and HIIT.

Beginning to meditate doesn’t have to be anything fancy. It literally can just be sitting and cultivating a state of relaxed awareness. Meditation and mindfulness practices lead to many benefits and are a direct way to cultivate cognitive focus and functioning. In regular practitioners there are noticeable physiological differences in the actual structure of the brain. But even in terms of short-term practices, meditation can lead to delays and reductions in the production of cortisol after stressful events, which can lessen the impact of stress on our lives.

Some of these same benefits can be seen doing cognitive-based therapies as well, but meditation is an easily accessible option and there are numerous resources to help to develop and sustain a practice. Many communities have meditation groups, retreats and other resources. These range from anything form introductory meditation sits to 10-day silent Vipassana retreats that are available in donation-based centers internationally.

Recovery Dharma is a peer-led abstinence-based recovery community that hold meetings internationally, as well as online, which are based on Buddhist philosophy and the practice of meditation.

One Step at a Time

Often times when we imagine where we’d like to be in terms of a practice in any of these areas, it becomes more difficult to actually put in practice then we initially imagined. Even though the neuroplasticity produced by ibogaine makes it easier to learn new things and cement new habits, it doesn’t do all of this work for us and it still requires discipline and effort to take each step. The nice thing is that there can be benefits each and every time that we are able to pass that threshold and do any of these practices. Improving our relationship with any one of these areas, let alone all three, can be hugely beneficial.

It’s important to remember that the process of learning and growth isn’t linear. Sometimes will be easier than others. Taking the practice one step at a time is the only way to approach where we’d like to be.