The Stages of Change

Addiction is many things, but least of all does it feel like a choice. Most of the time people experience addiction as a loss of choice altogether. Yet, even from the most difficult circumstances, there are people who have been able to make significant and lasting changes. Ibogaine is far from a cure, but it has made some of the more difficult parts of this transition much more accessible to people, and can help to provide positive momentum for the future.

However, ibogaine will be just one part of an action plan. Whether you’re before treatment and planning out the process, or you’re after treatment and trying to understand how to move forward despite some continued challenges, looking beyond ibogaine to other tools and sources of support will be important.

Personally, I find this model of change useful because it has lined up with how I’ve experienced change after ibogaine in my own life. The largest dose of iboga that I ever took was in 2014 in Gabon when I was initiated into the traditional practice of Bwiti. After that session I had tangible physical effects that lingered for a few months, a feeling of a buzzing or electric energy in my chest. More importantly I felt a very deep shift of worldview. The changes that I noticed in my life afterwards were not enormous at first, but became many small shifts in how I saw situations and how I arranged my life. This new view became a new foundation that took time to rebuild my life around.

Most of these changes took place within the first year after my experience, and within two years I remember thinking that my life had pretty much shifted. I’m still changing, and my life is still impacted by iboga, but I feel like I’ve mostly absorbed and am living in the new perspective that came through that experience.

A lot of people that I work with describe similar long-term shifts, and this model, which is one of the tools used in SMART Recovery, has been useful to help discuss the challenge that emerge along the way.

The Stages of Change Model

The Stages of Change is based on the work of Prochaska and DiClemente who looked at people who had successfully made significant long-term changes in their behavior. They outlined the stages that people passed through and what in each of those stages contributed to their success. Their original research followed people who were attempting to quit smoking, but it has since been assessed in other groups of people attempting to stop using alcohol, cocaine, opioids, and even other behaviors. 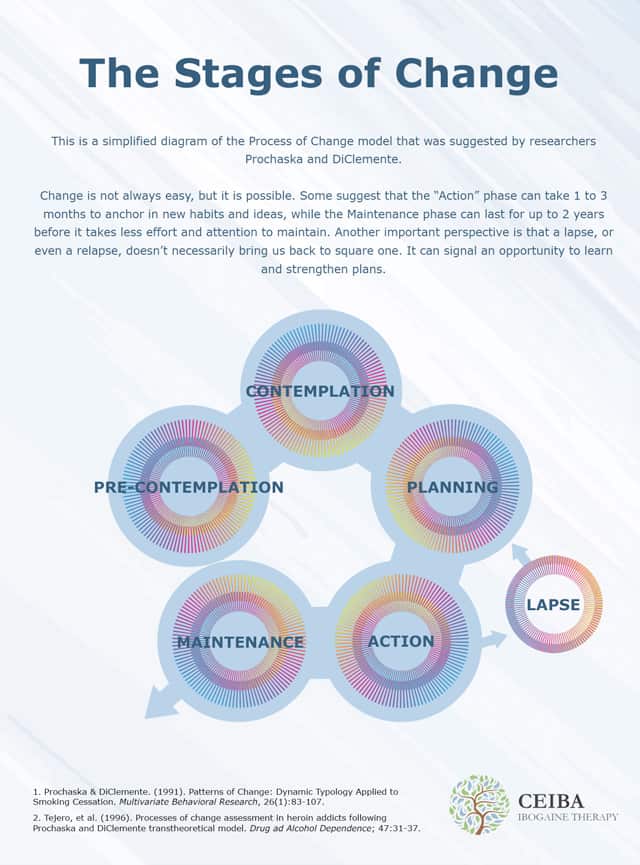 The Five Stages of Change

If you google “stages of change” many of the images will include relapse as a phase between Maintenance and Pre-contemplation. However, even some basic common sense can tell you that these are poorly designed. Not everyone who makes it through a long period of successfully maintaining a new lifestyle falls back to the Pre-contemplation phase. As we grow we will constantly find new areas of our lives that call us to change. We will pass through the cycle again, but it isn’t relapse that inspires new emerging growth.

I think this reflects general misconceptions about use and relapse in general. But reframed, Lapses and Relapses can become informative parts of the same change process. Change is not linear and a lapse doesn’t need to represent a return to square one. It can provide an opportunity to think about how we are approaching change, perhaps in a different way. These types of questions can help us return to the Planning stage, or the Action stage, and continue to move forward:

The Stages of Change in Ibogaine Treatment

In my work with clients I mention these stages to help emphasize the importance of taking a broader view of what it takes to accomplish long-term goals. I meet some people who arrive at ibogaine clinics two or three days after hearing about the treatment. This may be as far into the planning process as they have gotten. Often people are unsure about what they will do, or what they will need to do, afterwards. For some people this works out. The dissatisfaction with not having that personal agency is enough of a motivating factor to figure things out as they go.

Other people will benefit from thinking about ibogaine as a middle step in the Action phase. Taking a few weeks or months to prepare fully before arriving can go a long way. Making a clear plan for change, beginning counseling, stabilizing or tapering use, and starting a nutritional protocol are all things can help to lay a strong foundation.

It may be difficult to see what will be required afterward, but you will also thank yourself for making space afterwards for the physical, emotional and mental journey that follows. For some, that might involve taking time at an inpatient aftercare center, arranging for counseling, or joining some kind of recovery support network. Other times it might involve a major life transition, leaving a relationship, a job, a city. For others it might look like reconnecting with family in a new way, exploring ancestral roots, or a spiritual practice.

Planning to make space for this change can be difficult while focused mostly on the short term. As the process unfolds, and as you start to believe that change is possible, it is helpful to connect with that larger picture. What are the things that you value most in your life? What motivates you to move forwards? Where do you feel that you life is rooted, or could be rooted, to draw nourishment and inspiration?

The same thing can be helpful for family members to consider if they are encouraging a loved one to get help. Some people believe, or hope, that the ibogaine experience alone will bring up enough motivation to change. For some people that may be true, but in a lot of cases it is helpful to take things one step at a time.